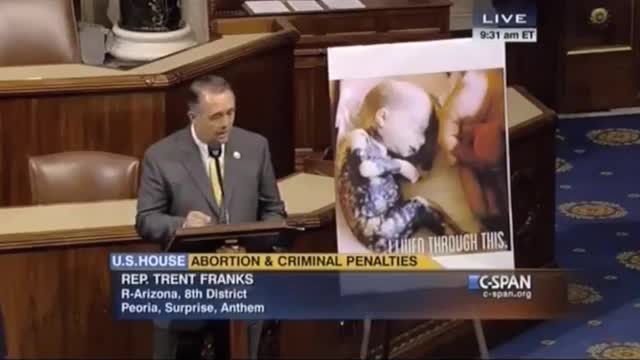 The U.S. House of Representatives passed a bill on Friday that would protect babies born alive during abortion by making it a federal crime to kill the baby after it is born, either by an overt act, or through gross negligence. The bill, entitled the Born-Alive Abortion Survivors Protection Act was introduced by Congressman Rep. Trent Franks (R-AZ)

H.R. 3504, passed by an even larger margin than H.R. 3134 – 248 to 177. H.R. 3134 is the bill passed in the U.S. House on September 18th which defunds Planned Parenthood America and its affiliates and clinics for one year, as reported by Breitbart Texas. Every Republican member voted for H.R. 3504. They were joined by five Democrats including Rep. Henry Cuellar (D-TX).

The representative from Arizona continued, “But Madam Speaker, those who oppose this bill to protect born alive babies now have the impossible task of trying to join born children and unborn children back together again and then trying to convince all of us to condemn them both as inhuman and not worthy of protection after all.”

The bill amends federal criminal laws to require any health care practitioner who is present during an abortion where a baby is born alive to exercise the same type of care that is given to a baby born at the same gestational age. It also mandates that the providers must immediately admit the baby into a hospital.

Any person who violates the provisions of this Act is subject to a criminal fine, and/or up to five years in prison.

Moreover, anyone who commits an overt act that kills a baby that has been born alive is subject to prosecution for murder by virtue of this legislation.

The law protects the mother of the child born alive from criminal prosecution for conspiracy to violate the provisions of the Act, for being an accessory after the fact, or for concealment of a felony.

A woman who has an abortion or an attempted abortion is given the right to file a civil action for damages against any individual who violates the Act.

The entire transcript of Rep. Franks’ floor speech can be read on his website.