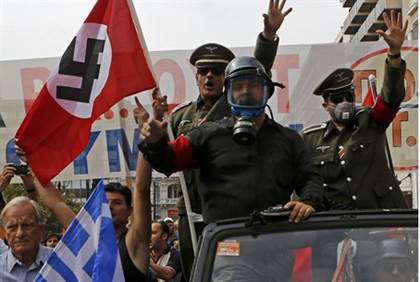 The motion highlighted that the “rally is due to take place on Saturday, the Jewish Sabbath, in an area in which 40% of the population is Jewish.” It praised “the public activism in opposition to the rally – and particularly the change.org petition to ban it, and the work of Hope Not Hate and the London Jewish Forum, under the umbrella of the Golders Green Together campaign, to promote solidarity and celebrate diversity in the local area.”

The British MPs added that they believe “every measure should be taken to protect Golders Green’s vibrant community from provocation and abuse.”

They called on Theresa May to “consider what further actions the government could take to isolate the politics of hate and division on our streets.”

At the rally, one of the fascist leaders has announced the neo-Nazis plan to desecrate Israeli flags and Jewish holy books in solidarity with the [so-called] “Palestinian” Muslim Arabs and against the State of Israel.

Joshua Bonehill – a fascist activist with numerous convictions for petty crime and racism – initiated the anti-Semitic campaign earlier this year, and announced this month that before the rally “there will also be a private ceremony held before the demonstration at an undisclosed and private location where copies of the Talmud books will be burnt in recognition of it’s racist Anti-White teachings.”