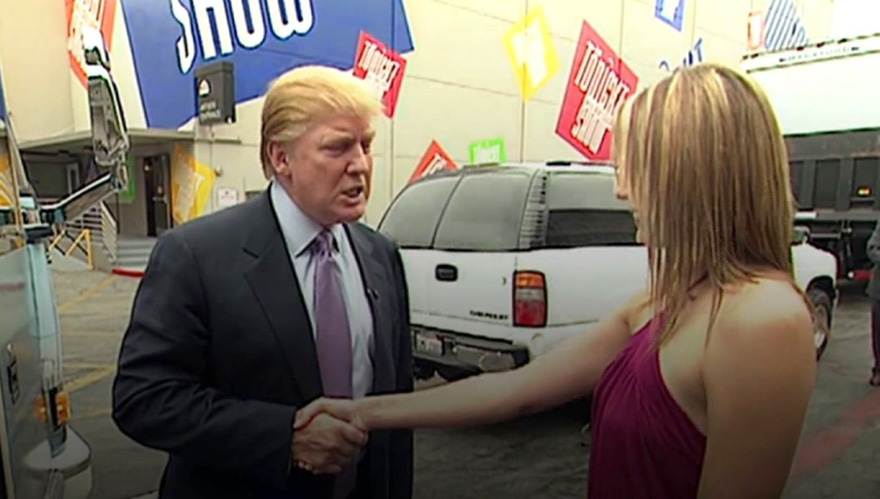 Abcess Hollywood released a hot mike audio of Donald Trump at his Trumpiest. The nation gasped and had its biggest “Oh, the humanity!” moment since Lakewood, New Jersey. Raise your hand if you were surprised.

News shows play for ratings. Why be a News Reader when you can be a Star? Why report the news when you can be the news? I’m Leslie Stahl, I’m Morley Safer, I’m Mike Wallace. I’m Candy Crowley, and I’m smarter than a presidential candidate. I’m George Stephanopolous, and I’m so convincing playing “impartial”, I deserve an Emmy.

Meanwhile, so-called “reality” shows are anything but. The shows are heavily scripted and edited to play up attractive characters and downplay the cringeworthy ones. Producers instigate conflict because harmony doesn’t sell. Closing the circle, network news shows report reality show results as if they are actual news. Jenny was voted off SurvivorIsland! Who will be the next American Idol?

In the race for POTUS2016, the Republican candidate selection process played out like an extended season of The Bachelorette. The field of 17 included the obligatory stereotypes: the entitled Silver Spooner, the Tough-Talker from Jersey, two Striving Cubans, and the Black Guy who wouldn’t make it past Episode 4. Established Reality TV Star Donald Trump was the a**hole who had an instinctive knack for the game. OMG, can’t The Electorette see what a jerk he is?? But ratings are everything, and as the season-long drama played out more deserving suitors were voted off the Island one by one, until only Trump the Cad remained at the Final Rose Ceremony — the Republican Convention in Cleveland.

Now it’s the general and the name of the game has changed to “Who Wants to Carry the Nuclear Football?” Grown-up time. Trump must be destroyed.

The Trump P***ygate tape was from 2005. Certainly it was not newsworthy then, but it was newsworthy in, say, October 2015. Back then, the Abcess Hollywood tape would have been the RU-486 the Trump candidacy desperately needed, avoiding the painful late-term procedure that the Republicans have scheduled for November 8th.

Consider this Page Six story via Jezebel (a/k/a “She who must not be linked” – emphasis mine):

A source close to [Billy] Bush told us, “He told people at NBC about this tape. What if there was a transcript of the tape, and high-level discussions about when to release it? Which executives were involved, and why did they decide to suppress the tape until October, when they could have aired it in August? Was it an oversight or a strategic decision by NBC to affect the race? Billy was far from the only person at NBC who was talking about the contents of this tape. On-air talent does not make the decision when to air stories like this.”

In other words, NBC had the Trump-damaging tape months ago. They released it last Friday only because it scooped Billy Bush and Abcess Hollywood, who planned to run with on Monday.

Millennials may wish to review the Quiz Show Scandals of the 1950’s. The most notorious example occurred on NBC’s quiz show Twenty One. Reigning champion Herb Stempel had accrued $69,500 (a lot of dough in 1957) by correctly answering a variety of detailed questions across a wide array of topics. NBC bosses had a problem; the camera didn’t love the sweaty and Semitic Stempel, and Twenty One’s ratings were sagging.

Unfortunately for NBC, Stempel knew the game was rigged and had always been rigged. The show’s producers fed Van Doren the correct answers to the nearly-impossible questions in advance. Van Doren, briefly a media darling who had taken a job at NBC’s Today Show, resigned in disgrace. The aftermath resonated through the industry for years.

An email published Wednesday suggests that the interim chair of the Democratic National Committee had the text of a proposed question before a town hall event with Hillary Clinton and Bernie Sanders earlier this year.

Donna Brazile, the chair, is then thought to have shared the question with the Clinton campaign.

History doesn’t repeat itself, but it does rhyme. Mark Twain probably didn’t say it, but it’s true nonetheless.

“It’s a shame that our electoral process doesn’t have the integrity of professional wrestling.” – C. Paul Hilliard, 2016.

Trump is right about one thing. The fix is in. The Infotainment/News Industry is not part of the problem. It is the problem.