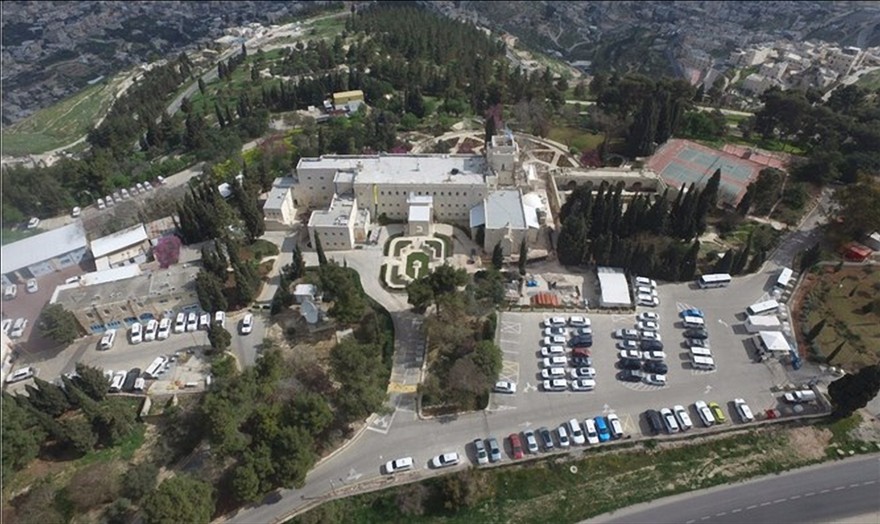 Southern view of the United Nations compound being built illegally in Israel on government land.

Why is the Israeli government still kissing the tuchus of the Jew-hating United Nations? It’s your country and your land. Stop being pathetic cowards! There is no mitzvah for being stepped on.

The Jerusalem District Court last week ordered the Jerusalem Municipality and the Israel Land Authority to respond to the petition filed last week by Regavim against the United Nations over an illegal construction boom at the UN headquarters in the Armon Hanatziv neighborhood, which belongs to the State of Israel.

The state, for its part, has filed a request for an additional postponement to the Jerusalem District Court, which indicates that the Ministry of Foreign Affairs has been in contact with various elements of the UN, and has asked the UN to allow a visit by professional bodies on behalf of the State of Israel.

The representatives of the Foreign Ministry also held a preliminary visit to the site, during which UN representatives claimed that the construction work currently under way without building permits from the Jerusalem Municipality and without the consent of the State of Israel belongs to the area, as “arising from the need for essential renovations in the historic building, which was erected in 1929.”

The state explained its request for an additional period, also because of “the need to formulate the State’s position on the legal aspects [of the case], including aspects relating to the immunity of the UN, as well as the need to further clarify the factual basis and the continuation of diplomatic contacts with the UN.”

The suit filed by the Regavim movement last month noted the flood of serious building violations committed by the UN in recent years, including concrete castings in the historic building, the construction of an illegal multi-story office building, a hangar storage and a pirate gas station that is also an environmental hazard.

After the liberation of Jerusalem, the Israeli government gave UNTSO, a UN agency, the right to use the area, free of charge, to supervise the cease-fire between Israel and its neighbors after the war.

The United Nations agencies UNTSO and UNSCO are currently operating in the compound, alongside the office of UN envoy to the Middle East Nikolai Maldanov, who is conducting blatant and hostile anti-Israel activity and which Defense Minister Avigdor Liberman has proposed to boycott.

At the end of last week, it was announced that during the celebration of Israel’s 69th Independence Day in Jerusalem, the UN Educational, Scientific and Cultural Organization is expected to adopt a resolution according to which the State of Israel is not the sovereign in Jerusalem. Last year, the UNESCO Executive Committee adopted the PA proposal which denied the Jewish connection to the Temple Mount and the Western Wall, a decision that caused great anger in the Israeli government.

“The moment before Israel’s 69th Independence Day and the 50th anniversary of the liberation of Jerusalem and Judea and Samaria, the position of the Foreign Ministry under Netanyahu is crying out for humiliation and defeatism.” The UN is in Jerusalem as a guest of the State of Israel, As if he were the sovereign on the site. It is inconceivable that the owner of the house grovels before the guest and asks him for permission to tour his home,” says Meir Deutsch, director of the policy and government affairs department at Regavim.