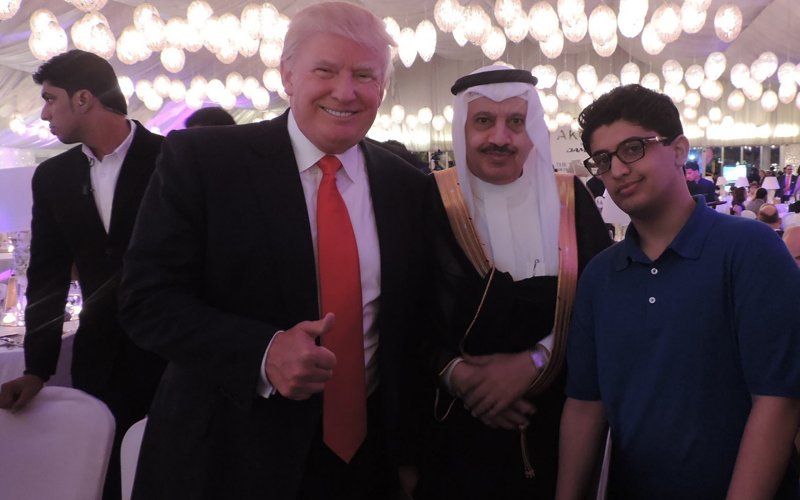 Despite vowing to engage in wholesale surveillance of American Muslims, close American mosques and ban anyone who is Muslim from entering our country, Trump has repeatedly told us:  “I love the Muslims!”   Well on Sunday Trump went further by quantifying how many Muslims he loves, telling a reporter that he has at least 20 Muslim friends.

Typically when people have a history of making hateful comments about a minority group they offer up the cliché, “I can’t be a bigot, I have a (fill in the blank) friend.”  But not The Donald. Everything he does is “yuuuge,” so he doesn’t just have one Muslim friend, he has over 20.

The only problem is Trump didn’t name his Muslim friends. Instead he ducked away from the reporter.  So I was curious: who are Trump’s Muslim BFFs?

I have tons of Muslims friends so I reached out on social media to see if any were Trump’s buddies or even knew one. But not one of them admitted to being Trump’s pal. The responses I received, though, did paint a picture of how many Muslim Americans view the GOP frontrunner.

Ahmed Bedier echoed many with his response: “I’m sure we can find 20 Muslim dictators around the world.” Another, Fay Saad, posted on Facebook, “It’s weird that Trump has a count of how many friends of any faith he has.” That’s a good point. If someone asked me how many Christian friends I had, I would not be able to quickly tabulate that figure. Instead I would say something like “a ton.”

And while some tweeted, “Hell no, I’m not Trump’s friend!” others like Nawar Shora joked: “Damn… This is a little embarrassing… We bumped into each other waiting on the fajita bar at Trump Tower Las Vegas… And well, any friend of refried beans is a friend of mine.”

But the most common response was the most accurate: “No, I’m not rich.”  As I noted before, Trump does love Muslims who make him money. And while in the Middle East, Trump sings the praises of Muslims because it makes him a pretty penny, but he demonizes Muslims in America because it gets him votes in the GOP primaries. If hypocrisy were an Olympic sport, Trump would be going home with a basket of gold medals.

That’s why it’s unsurprising that when the reporter asked Trump about his Muslim pals he didn’t talk about his “good friend” (Trump’s words) Hussain Sajwani, whom he went into business with in 2014 in Dubai. Together the two developed a massive 42 million-square-foot project that includes 104 villas and mansions that begin at more than $1 million U.S. dollars and climb to over $10 million a pop.  The development’s centerpiece is the golf course that will bear Trump’s name as well the exclusive “Trump private mansions.”

Also unsurprising is that Trump didn’t mention the Muslims who he’s working with to develop hotels in Saudi Arabia, Qatar and Abu Dhabi.  Plus there are his Muslim business partners in Turkey who are involved in his “Trump Towers” in Istanbul.  And let’s not forget the Muslims involved in his project in Indonesia, the nation with the world’s largest Muslim population, who are developing “Trump International Hotel & Tower Bali.”

You see, Trump knows that mentioning the names of all these Muslims friends will hurt him among his rabidly anti-Muslim base of supporters. After all, 77 percet of Trump supporters think that Islam is “at odds with American values” You think these same people will still be as enamored of Trump if he talks about hanging out with a bunch of Mohammeds and Mahmouds?

But the fact that Trump has even one Muslim friend while espousing such xenophobic views about Muslims flies in the face of logic and polling. What I mean is that typically, people who have friends in a minority group view that minority group more favorably than those who don’t have a friend. It makes sense. You have a human connection, so that helps you better understand, connect and emphasize with people in that community.

In fact, polls bear that out. For example, a December poll found that Americans who knew a Muslim viewed Muslim Americans 25 percent more favorably than those who didn’t have any contact with a real-life Muslim.

That would mean that Trump likely holds more positive view of Muslims than he’s letting on and is simply dishing out anti-Muslim BS to help his campaign. Now I’m not giving Trump a pass for his bigotry by saying he might not believe the words he is saying.  What I’m saying is that it’s despicable to be bigot, but it’s even more vile to serve up hate of a minority group not because you believe it, but because you think it will help you attract votes. And given what we have learned about Trump this campaign, vile and Trump go hand in hand.

Leave a Reply to A. Cole Cancel reply