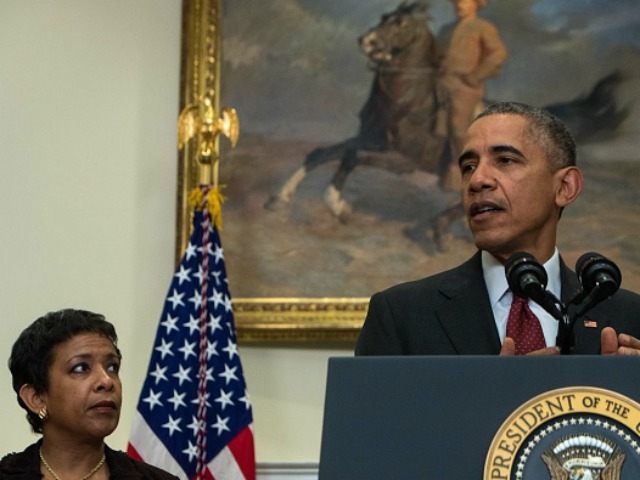 Here, let me help out a little. It was because of ISLAM!

President Barack Obama’s loyal Attorney General is struggling to help the president’s see-no-Islam narrative survive the massacre at the Pulse gay nightclub.
AG Loretta Lynch travelled down to Florida on Tuesday, where she presented Obama’s administration as the protector of grieving gays from inexplicable hate that has nothing to do with the peaceful religion of Islam. “We stand with you today as we grieve together. And long after the cameras are gone, we will continue to stand with you as we grow together, in commitment, in solidarity and in equality,” said Lynch.

But the facts keep intruding. On Monday, for example, the administration reluctantly released the killer’s 9-1-1 statements, where he declared his loyalty to Islam’s unforgiving deity, Allah.

“We stand with you to say that the good in the world far outweighs the evil… and that our most effective response to terror and hatred is compassion, unity and love,” Lynch said to the gay and lesbian community of Orlando, after what she described as a “very difficult meeting” with relatives of the victims.

The media isn’t helping, what with their stories about Obama’s failed ‘countering violent extremism‘ strategy, or the killer’s inexplicable decision to sell his house to his Muslim relatives for $10 shortly before the murders, or the wife’s reluctance to warn the FBI about the husband’s intentions, or his local mosque’s affiliation with a suicide bomber.

But Lynch is trying, she’s really trying, and she insisted on Tuesday that the killer’s motives might remain unknown amid the dead bodies, the Islamic invocations and the 9-1-1 transcripts.

“Federal investigators are still uncertain as to what drove [Omar] Mateen to violence and to what extent he may also have been motivated by anti-gay hatred,” she said, according to the Associated Press.

ABC News adds that Lynch said “people often act out of more than one motivation,” and Mateen’s true motive “may never be known.”

Lynch did describe the attack as “clearly an act of terror and an act of hate,” but also remarked that no one has “found the magic bullet” to prevent people from becoming radicalized by Internet propaganda.

CNN‘s report shows that the DOJ’s acrobatic act with edited transcripts of Mateen’s 911 call has reached the clown-car stage, as Administration officials fumble for a scapegoat:

The decision to leave the names [of ISIS and its leader, Abu Bakr al-Baghdadi] out started with FBI agents in the Orlando field office who were following the lead of agency Director James Comey, who generally refuses to use the names of terrorists, CNN’s Evan Perez reported, citing law enforcement officials.

Officials at FBI headquarters and the Justice Department signed off on the decision, the law enforcement officials said.

“We’re not going to propagate their rhetoric, their violent rhetoric,” he said.

The Orlando police are also facing some criticism of the way they handled the standoff with Mateen, including criticism from survivors of the attack.

“Why couldn’t we have taken care of this much earlier?” asked survivor Jeanette McCoy. “There were people in there bleeding to death. A part of me puts a sense of blame on [police]. I’m sorry, but I was there. They could have done something.”

Orlando police chief John Mina countered by saying Mateen was responsible for all deaths that occurred during the incident, declaring he was “extremely proud of the heroic actions of our officers, and I am very confident they saved many, many, many lives that night.”

During a visit to Orlando on Tuesday, Attorney General Loretta Lynch promised that the Justice Department is “making $1 million in emergency funding available to the Florida Department of Law Enforcement,” even as Florida Governor Rick Scott’s request for $5 million in FEMA disaster relief was denied.

“The state will be able to apply for funds on behalf of Orlando and other affected jurisdictions to cover overtime costs for state and local responders,” said Lynch.

CBS News notes the attack by Omar Mateen left 49 dead and 53 wounded, with many families unable to afford “the massive medical bills and funeral expenses the shooting created.”

Lynch said the Justice Department would provide counseling for first responders, and was forming a partnership with local officials to create a “Family Assistance Center,” where “those affected by the Orlando shooting can find counseling, post-disaster planning assistance, and other support,” according to the CBS report.

The Attorney General also promised that federal emergency funds would be made available to “cover family travel expenses, medical and mental health expenses and other costs related to the tragedy.”

As for Governor Scott’s request for FEMA funds, a spokesman for the agency said that while emergency funding was denied, Florida’s request to reallocate $253,000 in unspent Homeland Security grant money to pay overtime costs for first responders was approved.