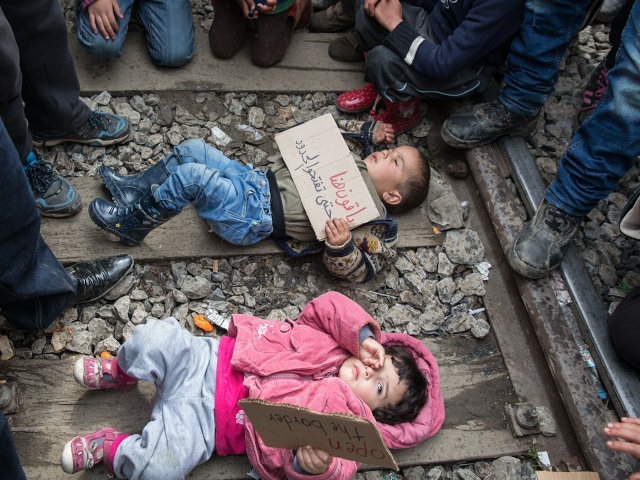 Muslim Migrants have placed their own babies, toddlers and young children on railway tracks in Greece in a bid to blackmail European authorities into reopening their borders.

The children were placed on tracks leading to Macedonia at the Idomeni refugee camp on the Greece-Macedonia border this weekend.

Banners around their young necks were scrawled with demands; “open the borders”, read one, “Everyone has the right to live. Liberty and security of person”, said another.

“We understood the EU advocates human rights not human trafficking”, and, “I’m child and might not know much, but I believe treating people disrespectful for being born on the other side of the planet is called: ‘RACISM’”, added others.

The dramatic scene played out during series of furious demonstrations over the weekend, where migrants waved Germany flags and chanted aggressively.

Around 36,000 have been trapped in Greece recently, unable to move on to their preferred destinations – namely Germany and Sweden.

The build up began weeks ago, when Macedonia — which is not a member of the European Union (EU) or in the Schengen free movement area — began to seal its border on the 20th of February.

Greek authorities have been offering them free buses back to Athens, the Greek capital, where they will be sent on to brand new registration centres that can comfortably house 50,000 people.

However, the majority is resistant to registering as they plan to break in to Macedonia and travel on to Northern Europe illegally.

Around 140,000 migrants have reached Greece from Turkey so far this year, and another 100,000 are likely to arrive by the end the month, Europe’s migration commissioner warned last week.

The so-call ‘Balkans route’ has effectively been closed off, as huge fences have gone up on the Hungarian and Bulgarian borders, as well as Macedonia.

Slovenia, Croatia and Serbia have announced they will refuse the transit of most migrants through their territory, and Serbia has now begun to construct a fence of its own.

At talks in Brussels last week, the EU agreed in principle to a Turkish proposal to take back all illegal migrants landing on the Greek islands.

Turkey drove a hard bargain, however, doubling the amount of money previously promised by EU leaders to €6 billion and securing accelerated access to the Schengen free movement zone for its 75 million citizens. 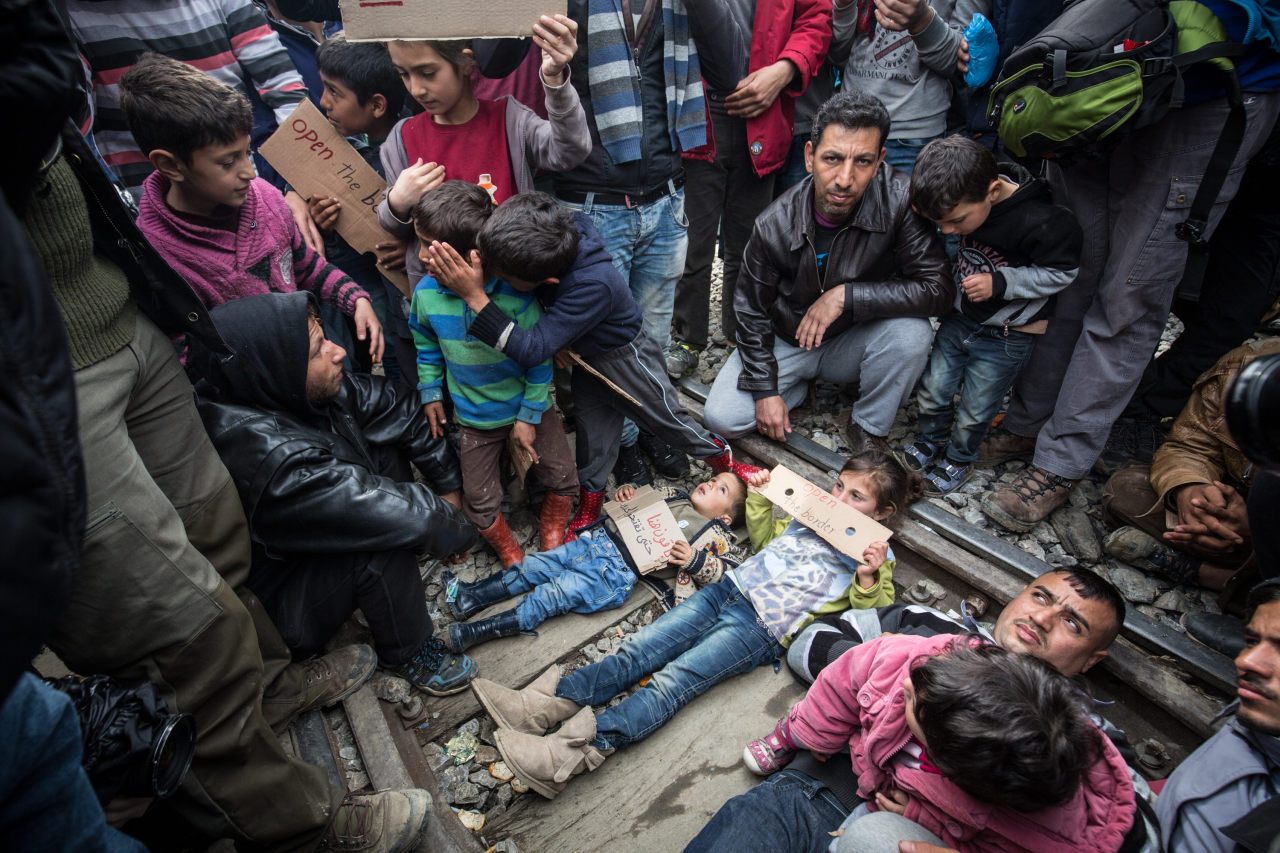 Normal people do not force their babies and toddlers to lay down on railroad tracks. 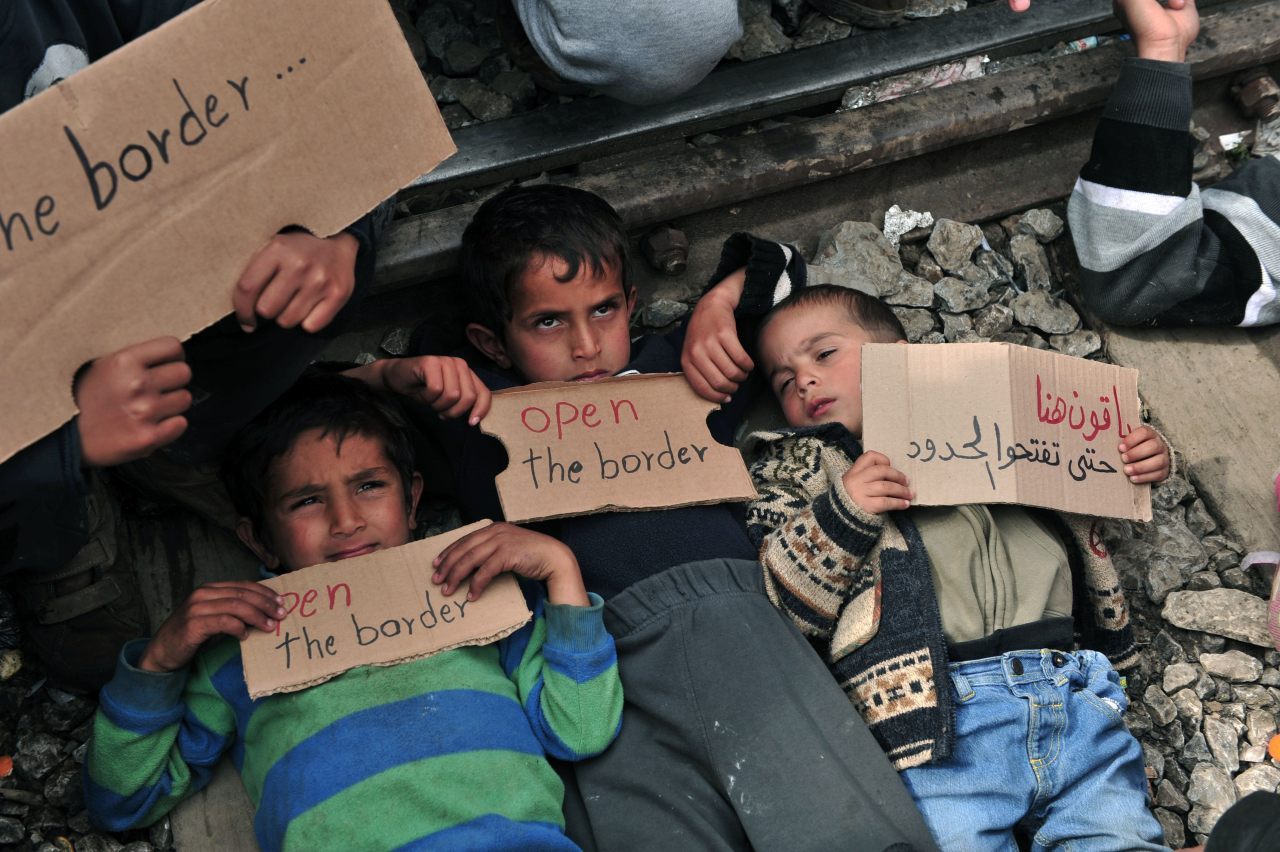 They are being forced to lay down on sharp rocks and metal and if a train comes, they are not allowed to get up. 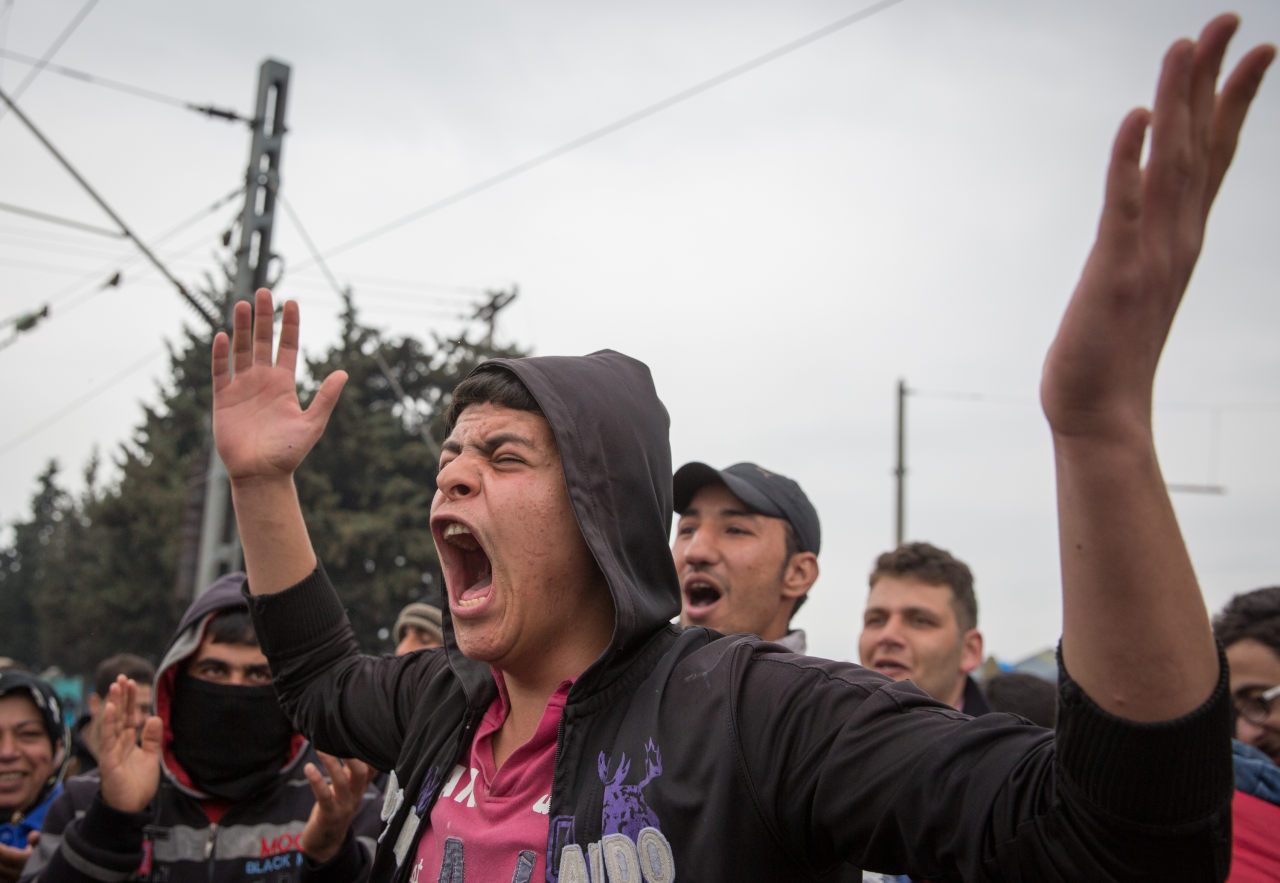 Muslim migrants are upset and angry. What a big surprise. 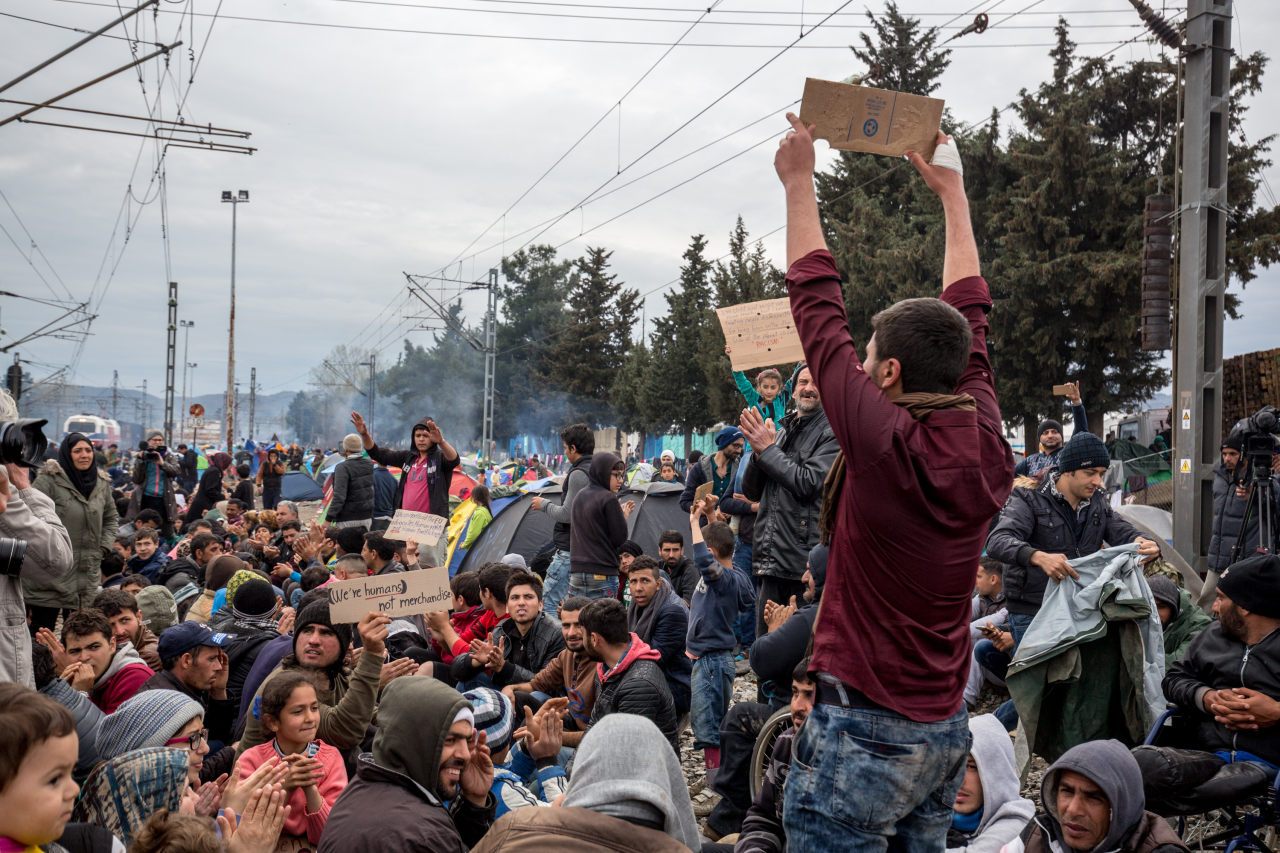 The Muslim migrants have set up tents and have no plan to leave. Their kids will be laying on those train tracks for a long time. 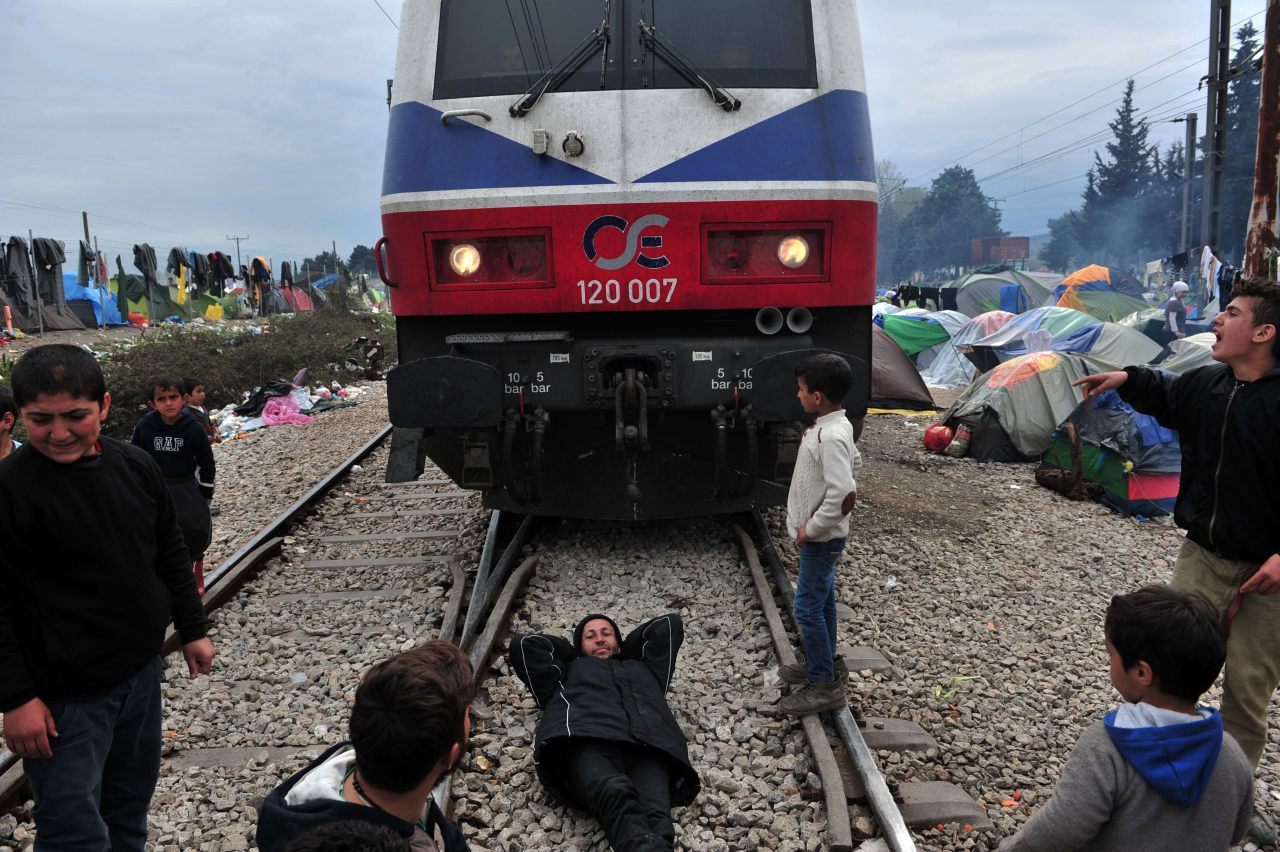 You’ll also notice all the mayhem, trash and garbage that these migrants leave where ever they go.