Dr. Clifford Ollier and Dr. Albert Parker detailed in their piece “Is the Sea Level Stable at Aden, Yemen?” the major discrepancies between raw sea level data and adjusted sea level data near the shores of Karachi, Mumbai, and Aden.

As noted by Climate Depot, the unadjusted data from the guages present in the Indian Ocean shows that sea level trends over the past 140 years have been either neutral, negative, or slowly rising.

Kenneth Richard, a writer for No Tricks Zone, reported that Parker and Ollier exposed how information in the global data-bank Permanent Service for Mean Sea Level was manipulated to show a drastic rise in sea level.

“The authors expose how PSMSL data-adjusters make it appear that stable sea levels can be rendered to look like they are nonetheless rising at an accelerated pace,” Richard wrote.

He then detailed the process believed to be used by climate scientists who deliberately adjusted the data.

“The data-adjusters take misaligned and incomplete sea level data from tide gauges that show no sea level rise (or even a falling trend),” Richard wrote. “Then, they subjectively and arbitrarily cobble them together, or realign them.

He continued: “In each case assessed, PSMSL data-adjusters lower the earlier misaligned rates and raise the more recent measurements. By doing so, they concoct a new linearly-rising trend.”

The photo below, which is from Ollier and Parker’s paper, shows two graphs with distinctly different data. 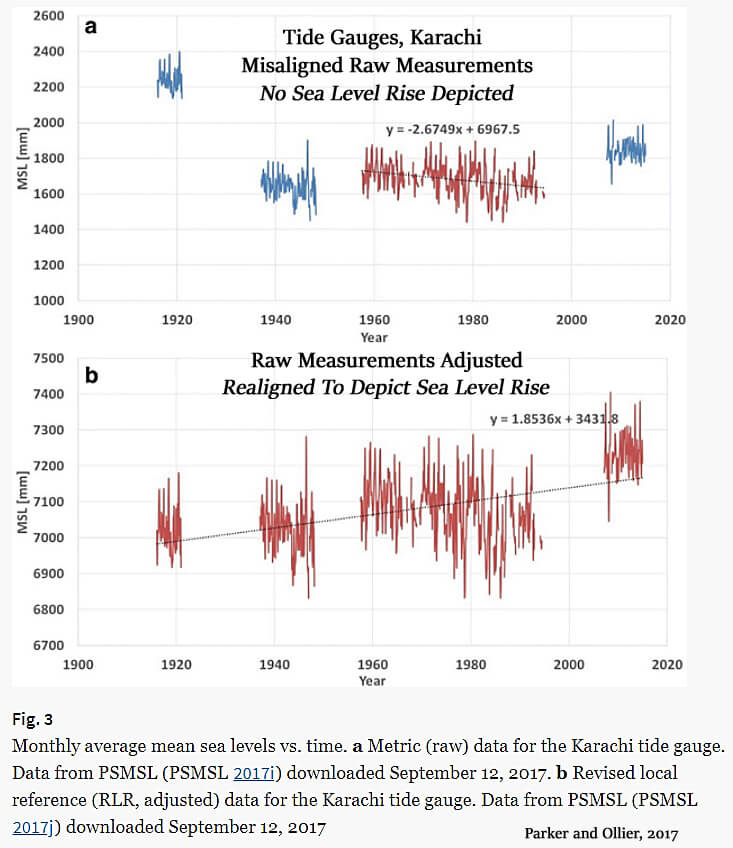 The top graph shows the raw data measurements scattered across the graph with no observable trend, while the bottom graph shows the same data realigned and manipulated to show a rising sea level trend.

Parker and Ollier claimed in their paper that these adjustments are “suspicious” and “highly questionable.”

The manipulated data has been used by other global databases such as the National Oceanic and Atmospheric Administration to that claim there has been a drastic increase in sea level over the past century. According to Ollier and Parker, the NOAA used altered data to reflect a sea level increase from 1.21 mm/year rise to a 3.02 mm/year rise, Breitbart reported.

The two scientists note, however, that it is extremely difficult to obtain and put together consistent sea level data over a long period of time.

“What is proposed as a single record in databases such as the Permanent Service for Mean Sea Level (PSMSL) (PSMSL 2017a) is often the composition of data collected by different instruments, sometimes in different locations or over different time windows, with significant gaps in between one measurement and the others,” Parker and Ollier wrote.

The adjustments made by PSMSL are acceptable, but the way they aligned the data to show a rising trend is deceitful.

Parker and Ollier concluded that raw data obtained from the three gauges shows that sea level has remained fairly consistent over the past 140 years.

“The reconstructed tide gauge records of Aden, Mumbai and Karachi are perfectly consistent with multiple lines of evidence from other key sites of the Indian Ocean including Qatar, Maldives, Bangladesh and Visakhapatnam,” Ollie and Parker stated. “The sea levels have been stable since the start of the twentieth century in Aden similar to Karachi and Mumbai.”