Michael Reagan on Fox News Bias: ‘They’re in the Tank’ for Trump 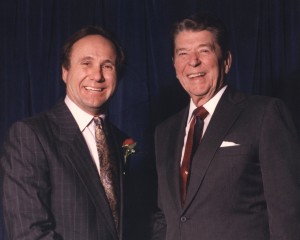 “Megyn Kelly had Ted Cruz on last night for quite a long time, but on the other side, O’Reilly had Trump on again,” Reagan, the eldest son of former President Ronald Reagan, told “Newsmax Prime” host J.D. Hayworth. “If anything, you’d think they’re in the tank for Donald Trump.

“Donald Trump’s on Greta every night,” he added, referring to the “On the Record With Greta Van Susteren” program. “How many times has he been on the [Bill] O’Reilly show — and those are the number one shows on Fox leaning up to Tuesday night New Hampshire?”

He added that, if anything, Fox is talking more about the junior Florida senator because the top two spots in the Republican race are pretty-much set — Donald Trump and Ted Cruz — and the question is who will place third.

Rubio finished just a point behind Trump in the Iowa caucuses last week, with Cruz winning the contest, while ending at No. 5 in the New Hampshire primary on Tuesday.

“All the talk is about third place,” Reagan told Hayworth. “Everybody’s giving it that it’s going to be in fact Donald Trump and Ted Cruz, number one and two.