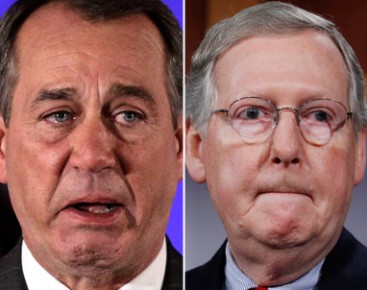 There is perhaps nothing more craven and disgusting than a man (or woman) who believes in nothing more substantial than their own self-aggrandizement put in the position of having to make a principled decision. That is what we’re seeing in the House of Representatives.

House Speaker John Boehner will move a vote today on a bill that will fund the Department of Homeland Security for three weeks. No one is exactly sure what the purpose of this bill is. Sen. Mitch McConnell (R-KY), being the feckless old go-along-get-alonger that he is, doesn’t have the guts to really do anything substantive. As far as I can tell all this bill does is give Sen. Harry Reid (D-NV) three additional weeks to rub McConnell’s nose in the steaming pile of poo that McConnell has dumped on the Senate floor. I’m not necessarily opposed to that if it were the point of the bill, but the bill probably indicates that Boehner is going to join McConnell under the bed in a fetal position but only after extracting maximum damage from the GOP.

The House will vote Friday on a bill funding the Department of Homeland Security for three weeks in an attempt to avert a shutdown slated for Saturday at the massive agency.

If the bill is approved by the House, the Senate is expected to quickly follow suit — though the upper chamber also plans to move forward with a bill funding Homeland Security through the end of the fiscal year.

The article goes on to note that the Democrats are actively whipping against the bill so it will have to pass with only GOP votes. That, alone, should tell you that this bill is a profoundly bad idea.

But this isn’t about Boehner. This is about the wannabe Quisilings in the GOP caucus.The carpers who refuse to take a principled stand on anything… other than pork barrel spending and, in King’s case, defending IRA terrorists… and, to make matters worse, refuse to let others take a stand.

The measure “just delays the inevitable,” said moderate Rep. Charlie Dent (R-Pa.), who’s been urging his colleagues to pass a longer-term clean funding bill without any immigration riders. “I think up to this point, we’ve engaged in an exercise of tactical malpractice. Self-delusion is self-destructive.” 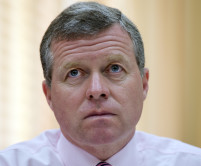 Dent, to be charitable, is an idiot. The measure only “just delays the inevitable” because men, and I use the term only in the XY chromosome sense, like Dent simply refuse to stand up for principle and are too dumb to recognize a winning hand when it is dealt them. The funding lapse of DHS is utterly meaningless in terms of agency operations that matter. It boggles the mind that people nominally on our side are pushing the Democrat talking point that national security will actually suffer if DHS goes without funding. Well over 80% of that agency will remain on the job without funding. The only “tactical malpractice” involved is that of Dent. The only “self delusion” occurs when Dent has to send out a search party to find his manhood.

And no gallery of spinelessness would be complete without Pete King, the Irish Republican Army’s very own member of Congress.

Rep. Peter King (R-N.Y.) said he has “no clue” what the end game is on the DHS funding fight, but said he’s fed up with his party.

“I’ve had it with this self-righteous delusional wing of the party, which leads us over the cliff and may turn us into the charge of the light brigade,” King said.

Asked to elaborate on what the consequences are for Republicans, King said, “How many times can we go over the cliff and survive?”

Since Pete King was either in a drunken stupor or coma since 1995, I’ll give him a hand. In the 1996 election, that followed the 1995 shutdown, the GOP gained seats in the Senate. In 2014, after the 2013 shutdown, the GOP took decisive control of both the House and Senate. This should indicate that going over the cliff and surviving is not only easy but advantageous. If he has “no clue” about what the end game is, this speaks more to his general cluelessness than it does to what is at stake.

We have a president who has usurped Congressional authority. An agency’s funding will lapse. Most of that agency will continue to work. If the GOP can’t win with this hand they shouldn’t be playing the game. And we are cursed with people like Pete King and Charlie Dent who believe in nothing and are willing to fight for nothing.