Trump’s strategy to cut property taxes — his own 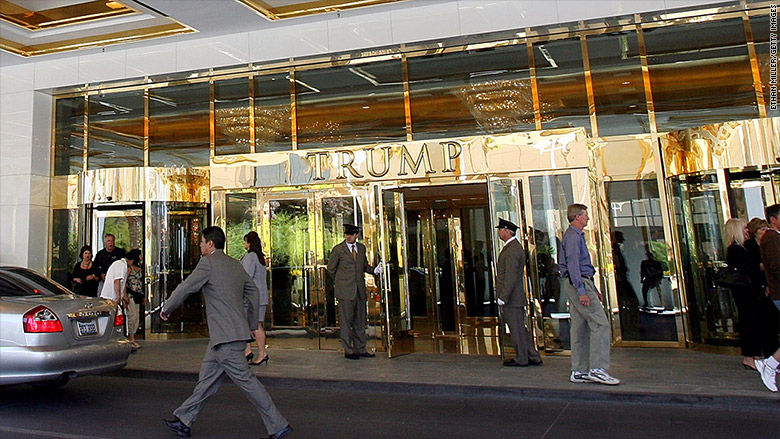 Donald Trump has repeatedly said he pays “tremendous” amounts in taxes, but when it comes to his properties, he fights to pay as little tax as possible. And that often comes with a cost to the towns or cities where Trump owns property.

A CNN review of more than two-dozen U.S. properties owned or partially owned by Donald Trump, in which tax records could be obtained, has found Trump has filed appeals, petitions or challenges to lower the taxable value in all but one.

In 25 of 26 buildings, golf courses and homes, tax assessors and officials say attorneys for Trump and his companies have fought assessed values in an attempt to lower his taxes.

Tax expert Lee Sheppard says this is how big property owners do business. “Everyone with a big commercial building does that. Everyone,” Sheppard told CNN. “I mean this is how the system works.”

But the tax cuts Trump seeks are sometimes far beyond what is considered normal.

His latest battle involves the newly opened Trump International Hotel in Washington D.C., where the district’s assessor originally valued Trump’s interest in the property for tax purposes at $98 million. Trump wants it assessed at $28 million, according to court documents.

So far, the district has agreed to reduce the assessed value to $91 million, but Trump’s development company filed a petition in June seeking to further cut taxes.

A district source familiar with tax policy told CNN that pushing for a cut of that magnitude is “out of the norm.”

Trump takes the aggressive approach because it apparently works.

Sheppard, an analyst for the journal Tax Notes, says it is not unusual for buildings to be taxed far less than what they are worth.

“Donald Trump could pay a lot of money for a building and then tell the property tax assessor, ‘Look, the assessable value of this is much lower and we’re going to argue about it…. It’s a negotiated concept,” Sheppard said.

In many cases reviewed by CNN, Trump’s successful challenges have reduced his property taxes by hundreds of thousands of dollars a year. Unfortunately for local governments, that has often led to missing sources of income that could be used to run schools, fire departments and fix roads.

The Trump National Golf Course just north of Charlotte, North Carolina, is one example. Before Trump purchased the property, the course was taxed at a value of $24 million. From the moment Trump bought the property, he began challenging the assessment.

Today the course has a tax value of $9.7 million. The reduction in local taxes is estimated to range from $80,000 to $200,000 a year, according to a University of North Carolina accounting professor hired by the state.

A similar conflict has ensued at a Trump golf course in Briarcliff Manor, New York. The assessor valued the course for tax purposes at $15 million, but Trump’s lawyers are fighting to have the course assessed at a mere fraction of that, just $1.4 million.

Dana Levenberg, town supervisor of Ossining, New York, and a Democrat, says if Trump wins his appeal, the town will lose money to pay for various community services.

“That means a teacher. That means a garbage truck. That means parks can’t be fixed up and fields can’t be played on,” Levenberg told CNN. “We’re going to have to offset that somehow in the budget.”

Lawyers for Trump or his companies have sought reductions on a variety of other properties throughout the U.S.

In Los Angeles County, an attorney has repeatedly appealed the value of his swanky two-story Beverly Hills home, which includes a spa and cabana. The lawyer submitted an appeal each year since 2014, and in August, the county’s assessment appeals board agreed to slash the property’s taxable value by more than $1.2 million, dropping it to $6 million.

Lawyers have submitted appeals on two homes Trump owns in Palm Beach, Florida, as well as a condo he owns in New York City.

In Las Vegas, Trump’s partnership company that owns the towering Trump International Hotel protested the county’s appraisal, and in 2015, Nevada’s tax appeals board reduced the taxable value of part of the property from $48 million to about $25 million.

Trump’s companies have also challenged assessments on sections of his Chicago hotel and the Trump International Hotel & Tower in New York.

CNN found only one property in which Trump has not appealed the assessed value — his golf course in Bedminster, New Jersey—where he has used a different strategy to decrease taxes owed: goats.

By placing a small herd of goats on the property, the club qualifies for a New Jersey farmland tax break.