Bush lays out his illegal amnesty immigration plan … in Spanish 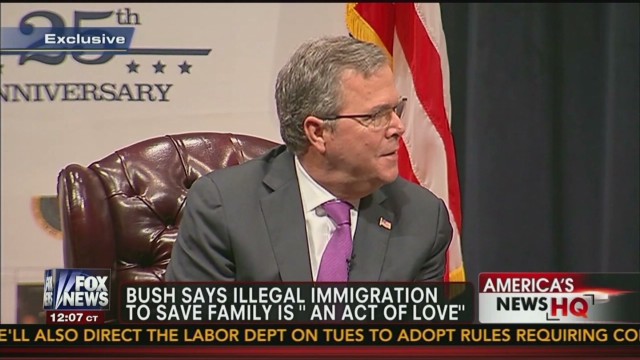 Jeb Bush told Telemundo he wants a pathway to legal status for all 11 million [illegal] immigrants in the United States.

In the interview, he talked about his immigration policies, his thoughts on Donald Trump and Cuba, and his home life and family.

“First, coming here legally has to be easier than coming here illegally,” he said. “So there needs to be an agreement with the border … for the 11 million people (who are here illegally), they must come out of the shadows, receive a work visa, start paying taxes and also pay a small fine, learn English, don’t receive government benefits, but they come out of the shadows and they receive legal status after some time.”

Bush shook his head as Díaz-Balart asked him to share how he felt about Trump’s comments on Mexico.

“I was hurt hearing somebody speaking in such a vulgar fashion. This makes the solving of this problem much more difficult when we have politicians talking like that,” he said. “Besides that, he was offending millions of people that are here illegally. It makes no sense. In a political sense, it’s bad and it creates an environment that is worse.”

On Cuba, Bush said he opposes President Barack Obama’s actions to mend relations with the country.

“I believe that the policy should be that we always want freedom in Cuba, we want democracy to change the relationship, but based on facts,” he said. “In this case, there aren’t even promises that he’s received to do this. And dictators are not going to leave quietly at night. They don’t leave. We must be vigilant and this president does not recognize that.”

The presidential candidate also shared a little bit about his home life and marriage.

He married his wife Columba, who is originally from León, Guanajuato, Mexico and an immigrant to the United States.

“She’s very Mexican and very proud to be Mexican,” Bush said about Columba. “We eat Mexican food at home, our children are Hispanic, and yes the Hispanic influence is important.”

Parts of the interview were aired Monday, and an extended version will air Sunday on “Enfoque con José Díaz-Balart.”